The road to renewable energy production has been paved, and more and more investors want to join in. Many people believe that a victory for Biden will be a victory for renewables.

But there are signs that the rapid growth in solar production will continue with either political party in charge. As residential and commercial solar production rises, three stocks that are expected to win no matter who gets elected are Enphase Energy (NASDAQ: ENPH), Sunrun (NASDAQ: RUN), and Brookfield Renewable Energy Partners (NYSE: BEP).

The International Energy Agency (IEA) has just published its World Energy Outlook for October 2020, where he presents four possible scenarios of how the global emergence of the coronavirus pandemic could affect energy production and demand. “Renewable energies are developing rapidly in all of our scenarios, with solar power being at the center of this new constellation of power generation technologies,” the report said.

In fact, the executive director of the independent agency, Dr Fatih Birol, said solar has become “the new king of electricity”. Although hydropower is currently the largest source of renewable energy, the IEA predicts that solar is the “main engine of growth” every year after 2022.

Enphase Energy and Sunrun are also positioned to be the primary beneficiaries of solar growth, particularly at the residential level. Enphase provides a complete solution for home solar energy systems. It is one of the leading suppliers of microinverters, which convert the direct current produced by the solar panels into the alternating current used in the home.

The company began to market its seventh-generation microinverter technology internationally in August 2020 and believes its next-generation technology, the IQ 8 and IQ 8D (for residential and commercial applications, respectively), will expand significantly. its addressable market usable by 2022. For its full product line, which includes its new energy storage offerings, the company estimates the market will grow from $ 3.3 billion in 2019 to $ 12.5 billion in 2022.

Sunrun recently completed its acquisition of Vivint Solar, bringing the current customer base to over 500,000 for the nation’s leading supplier of residential solar systems. Even before the reconciliation, Sunrun increased its customer base by 21% in its second quarter ended June 30, compared to the prior year period.

The growth that Enphase and Sunrun have experienced has not gone unnoticed by investors. While both have experienced strong income growth over the past three years, gains in stock prices have far outpaced the expansion in income. Nonetheless, it is over the next three years and beyond that the market itself is expected to flourish. 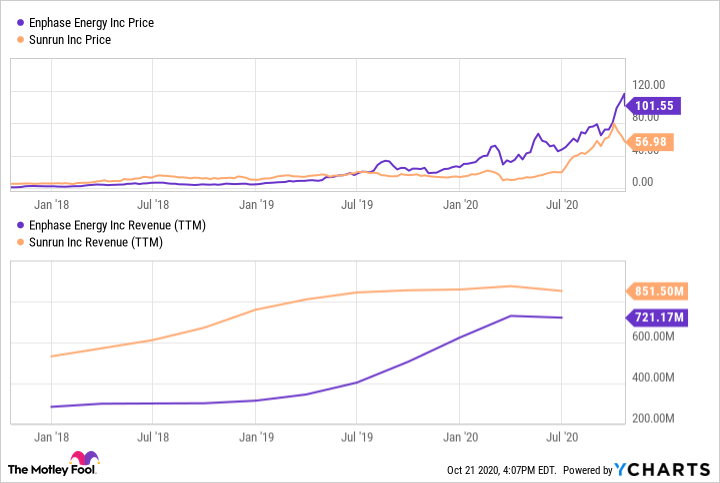 With a growing interest in renewable energies, Sunrun has a new opportunity to accelerate its growth with the acquisition of Vivint. Enphase now offers a complete solar solution, from solar panel microinverters to off-grid storage, all controlled by the company’s Enlighten software and Envoy management system. In addition, its product line is suitable for residential and commercial applications.

The other area that is expected to advance in solar energy is large-scale production. Brookfield Renewable Partners has an investment portfolio of more than 5,300 power generation facilities worldwide. Its ownership and investments consist of hydroelectric, solar and wind power.

The name Brookfield may be familiar to the parent company Brookfield Asset Management (NYSE: BAM). The Canadian investment firm channels its capital to its subsidiaries, including Brookfield Renewable . Brookfield Renewable, in turn, invests in and operates renewable energy projects. While nearly two-thirds of its investment portfolio is in hydropower, it stands to reason that its stake in solar projects will increase if the IEA forecasts materialize.

As an experienced allocator and capital operator, and with strong financial backing in Brookfield Asset Management, investors can diversify into solar generation using Brookfield Renewable Partners.

Solar will be a winner

While the election winner will inevitably have an impact on the pace of renewables growth in the short term, long-term investors shouldn’t think in terms of a few months or a year. The groundwork has already been laid for renewables to continue to contribute to energy infrastructure. No matter who resides in the White House next year, investors will win this election by betting on solar power growth. Enphase, Sunrun, and Brookfield Renewable are a good trio of candidates to invest your money in.