From the labs to the Peabody Museum to the tennis courts and CCAM, Engineering, Innovation and Design (ENAS 118) students applied their problem-solving skills across campus over the past semester. Taught by SEAS Principal Scientist Larry Wilen and SEAS Associate Dean Vince Wilczynski, the course drew on the expertise of faculty and staff from many Yale disciplines.

For each of these projects, the student teams worked with their clients – people who regularly encounter these issues and just want a better way to solve them. Most of the work took place in the John Klingenstein ’50 design lab at the Center for Engineering Innovation & Design (CEID), but students also made field trips to their project sites.

– So you want to practice serving tennis, but you are never sure you will hit your target? Ximena leyva ’25, Myriam Viazmenski ’25, and Boris Katafygiotis ’25 are there for you. Together with Yale tennis coach Christopher Drake, they developed SERTA, a bright target for tennis services that borrows technology from blood pressure cuffs. Existing targets tend to be heavy makeshift boards. In addition to being bulky, they do not alleviate the boredom that can arise during long sessions. On the other hand, SERTA, a mat placed on the side of the target, is light, durable and fun. When the ball hits the mat, the air inside is pushed out and triggers a pressure sensor, which then sends the data to an Arduino. The results are then displayed on an LED strip. 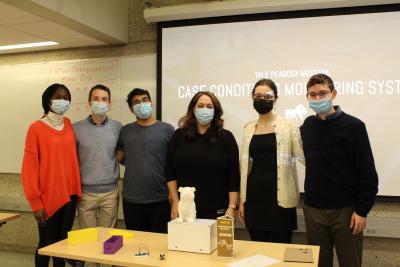 – To protect its exhibits, the specifications of a museum’s environment must be maintained at all times. The team of Jacob Lessing ’25, Urszula Solarz ’25, JP Fernandes ’25, Cam Greene ’24 and Annika Bryant ’25 worked with Peabody to create a system that allows administrators to monitor the environment from space to space. distance. The system monitors long-term levels of heat, humidity, visible light and UV radiation inside the display cases. Today’s systems are expensive, labor-intensive, and data recovery is not always easy. The student team has developed a system that can be designed for minimal costs, runs continuously for at least six months, and transmits the data in real time to the curator’s smartphone. In addition, the sensors inside the case are well hidden. 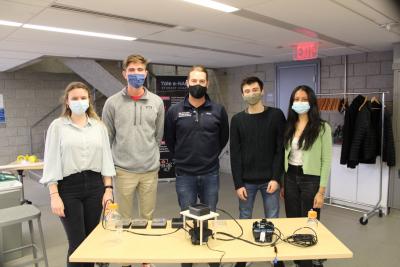 – The student team of Cecilia Russell ’25, Henry Kaplan ’25, Max Werner ’25 and Paula Toranzo Paredes ’25 developed a microplant processing system for the laboratory of Joshua Gendron, Associate Professor of Molecular Biology , cellular and developmental. Gendron needed a system to help him monitor the circadian rhythm of microplants (plants in their early stages of growth), which included treating them with luciferin to make them bioluminescent for imaging. The team’s task was to create a system that supplies and removes all the chemicals needed for seedlings with minimal disruption to the imaging process. They achieved this by creating Flowra, a system that pumps the chemical solution through the imaging chamber and into a flow chamber, and then into a flow. An overflow chamber retains excess liquid. 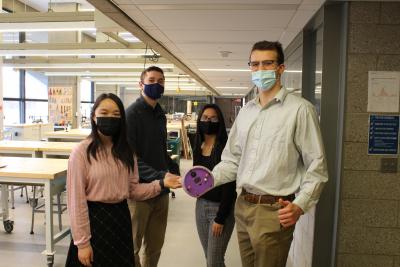 – For meticulous athletes who don’t just lift a lot of weight, but want to know how fast they are doing it, Ben Phifer ’25, Peter Messina ’25, Michelle Luh ’25 and Elyse Nguyen ’25 worked with TJ Belanger , Yale Director of Sports Performance and Student-Athlete Innovation. Existing systems for this are not only expensive, but they are not always accurate and can have poor battery life. The team created the Velocirepper, a device equipped with a time-of-flight sensor that measures the distance of the repetition and the time it takes to complete that repetition. An audible warning device and display guide the user through the process and let you know if you have reached your rep and speed goals. 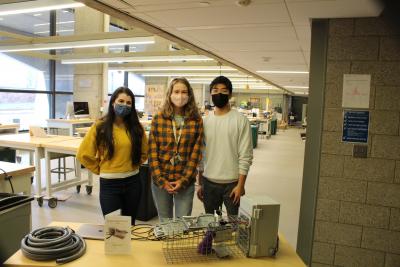 – Horse Island, the largest of the Thimble Islands off Branford, Connecticut, was used by Yale researchers to study wildlife. Working with Yale Peabody Museum’s Assistant Director of Student Programs, Nicole Palffy-Muhoray, the student team of Jin Wuk Lee ’25 and Sofia Rabbani ’25 were tasked with creating a humane trap that restrains an animal on less time possible. . They created a device that allows users to remotely identify the species and release animals from a distance. The trap is equipped with a camera which, when triggered, takes a photo of the animal and automatically sends the image by email. The user can then request more photos, or order the trap to release the animal. 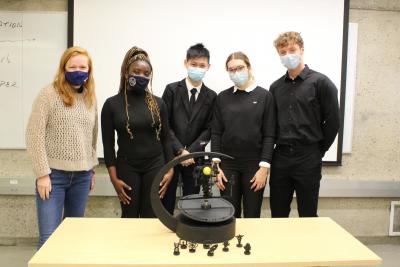 – Dona Elkwalla ’25, Pia Dukaric ’25, Jonah Heiser ’25 and Sena Sugiono ’25 worked with Dana Karwas, director of Yale’s Center for Collaborative Arts and Media (CCAM) to create a device that combines both engineering and art. The team created a mechanical model of the solar system, known as an orrery. Not only did the team have to design a system in which the different arms and gears moved at the right speed and in sync with each other, the sculpture had to represent the many different aspects of CCAM. The students noted that coordinating the aesthetics with the technical components of the project was the trickiest part. Karwas said the end result would be placed in the CCAM gallery, “as a way to explain what we do at CCAM”.