A monumental new work by artist and designer Es Devlin, BLUESKYWHITE, commissioned by 180 Studios will be unveiled at 180 The Strand, London on October 13, 2021. The work is part of a new immersive group exhibition: LUX: New Wave of Contemporary Art organized by SUUM Project in collaboration with Fact at 180 Studios, with works by Refik Anadol, Carsten Nicolai, Hito Steyerl, Random International and Universal Everything.

Es Devlin’s new work was done in response to solar engineering proposals to “sift the sun” to counter global warming, with potential unpredictable side effects including the end of blue skies.

BLUESKYWHITE is made up of two parts: in part I, text read by the artist from Byron’s poem of 1816 Darkness underlines the passage of the spectator in a tunnel lit in red 24 m long.

The poem was written the day after Mount Tambora, Indonesia erupted on April 5, 1815, which released over 100,000,000 tonnes of gas and fine particles into the atmosphere, causing noticeable dimming of the sun. and a temperature reduction of about 3 degrees Celsius in what has come to be known as the “year without summer” whose intense glowing sunsets have been documented in the paintings of JMW Turner and Caspar David Friedrich.

Part II draws on contemporary models of solar geoengineering documented by Elizabeth Kolbert and others who use volcanic eruptions like Tambora as a precedent to suggest that a haze of suspended particles could reduce global temperature to pre-industrial levels. while potentially making the blue sky white permanently.

“The work invites the viewer to experience two perspectives: in the tunnel, he is immersed in a 19th-century romantic poet’s first-hand account of the ‘year without summer’ caused by a volcanic eruption of 1815. One times through the tunnel, they are presented with contemporary tales of geoengineered solar solutions to global warming based on the phenomenon experienced by Byron – none of which seem acceptable, but some of which may become unavoidable ‘”

LUX: New Wave of Contemporary Art October 13 – December 18, 2021
LUX is organized by the SUUM project in collaboration with Fact at 180 Studios, 180 The Strand. This is the second in the LG OLED ART SELF-LIT GALLERY series, sponsored by LG.

For the first time since its construction in 1870 by Sir Joseph Bazalgette, the expansive, half-acre, undiscovered roof terrace […]

A flickering crossing, a jeweled barrel of oil, intense emotions and activism. 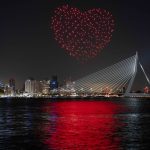 Superblue arrives in London and New York this fall after opening in Miami in April with the work of James Turrell, teamLab and DRIFT and Es Devlin.