Africa is the continent with the greatest solar energy potential in the world. The International Renewable Energy Agency (IRENA) estimates the solar energy potential of the African continent at 60 million TWh per year, against 3 million TWh per year for Europe for example. The countries of North Africa and Southern Africa are the most advantaged on the continent. Solar potential is also considerable in East Africa, the Horn of Africa and the Sahel. While the solar potential is more reduced in Central Africa, due to its equatorial climate and its ecosystems dominated by forests which reduce the penetration of sunlight.

While the potential of the African continent remains largely untapped, many efforts are being made to facilitate and accelerate the deployment of solar power generation facilities in Africa. For example, South Africa has 2,323 MW of installed solar capacity, according to Power Africa, thanks to a policy that encourages investment from independent power producers (IPPs). With the gradual decline in the cost of operating solar, Irena estimates that Africa could acquire 70 GW of installed solar capacity by 2030, provided that policies favorable to investments in renewable energies are put in place. Currently, the continent has an installed solar capacity of 12 GW according to the analysis firm Rystad Energy.

Among the solar energy production technologies implemented in Africa is thermodynamic solar. In a concentrated solar power plant (CSP), mirrors capture the sun’s rays to generate very high temperatures, between 400 and 1000 ° C. The heat thus produced is used to transform water into steam in a boiler. Under pressure, the steam turns a turbine which drives an alternator. It is this equipment that produces an alternating current.

There are three types of thermodynamic solar power plants in the world. In the case of a power plant with a cylindrical collector, long mirrors rotate around a horizontal axis to follow the course of the sun. The rays are focused on a tube in which the fluid circulates to transport heat to the plant. In parabolic trough technology, solar radiation is focused on the focal point of adjustable parabolas in which the mini power plants are located. In the tower power station, a field of adjustable mirrors on the ground reflects the sun’s rays onto a boiler at the top of a tower.

Due to the costs of installing these technologies, very few concentrated solar energy projects are currently being implemented in Africa. Power plants that exist or are under construction are mainly located in South Africa and Morocco. In Nelson Mandela’s country, the French IPP Engie operates the Xina Solar One plant and the Kathu plant, each with a capacity of 100 MW. Saudi IPP Acwa Power operates the 50 MWe Bokpoort CSP. In the Cherifian kingdom, the Saudi company has built several plants of this type within the 580 MW Noor Ouarzazate solar complex.

More common, photovoltaic plants are equipped with several solar panels. In such an installation, solar panels capture the sun’s rays. Under the effect of sunlight, silicon, a conductive material contained in each cell, releases electrons to create a continuous electric current. The inverter transforms this direct current into alternating current so that it is more easily transported by the medium voltage lines of the network.

Solar megaprojects on the continent

Photovoltaics is the most developed technology in Africa, from large-scale grid-connected power plants to solar home systems. This technology is at the heart of solar energy mega-projects in Africa. This is the case of the Benban solar complex, located in the governorate of Aswan in Egypt. It is a mosaic of 32 fully funded solar power plants built by IPPs. The complex will be commissioned in 2019 with a capacity of 1,650 MWp.

Although the Moroccan authorities are late in its implementation, the Noor Ouarzazate solar complex is one of the large solar projects developed on the African continent, with a current installed capacity (including photovoltaic and CSP) of 580 MW. The implementation of this project is part of the Moroccan government’s plan to produce 52% of the electricity consumed in the kingdom from renewable sources by 2030.

The commitment of development partners

Two development finance institutions want to rely on solar energy to accelerate the electrification of Africa. This is the case of the International Finance Corporation (IFC) of the World Bank Group, which is expanding its “Scaling Solar” program. This worldwide program enables the rapid installation of solar power plants through public-private partnerships (PPP). For the moment, “Scaling Solar” is deployed in Senegal, Ivory Coast, Ethiopia, Madagascar, Zambia and more recently in Niger.

In addition to its investments in solar power plants across Africa, the African Development Bank (AfDB) is focusing its efforts on the Sahel, which it wishes to make the largest solar energy production area in Africa, through its “Desert to Power” initiative. The program, which is entering its development phase, has already received $ 150 million in funding from the Green Climate Fund (GCF) for its “Desert to Power G5 Sahel” installation. The AfDB is targeting an installed solar capacity of 10,000 MW in the Sahel, the equivalent of the electricity production of a country like Morocco, which currently stands at 10,627 MW according to the National Office of Electricity and Drinking Water (ONEE).

October 20e, 2020, the International Solar Alliance (ISA) announced a partnership with Bloomberg Philanthropies to mobilize $ 1 trillion investment in solar power generation globally. This program involves the 80 member countries of the organization, most of which are in Africa.

Decentralized solar energy or the key to rural electrification in Africa?

The development of solar energy in Africa is also driven by decentralized systems generally financed and installed by private companies. These solutions are made up of solar home systems. This small, house-scale power grid is made up of one or more solar panels, inverters, and batteries for storing electricity. The stored clean electricity is redistributed on demand into the home network at night or in bad weather.

The distribution of its equipment is facilitated by the pay-as-you-go system, the main means of payment for which is mobile money, a mobile phone banking service available throughout sub-Saharan Africa, even in the most remote areas. Increasingly, solar home systems are accompanied by other services, including the Internet and television. This equipment has a real impact on rural electrification. Recently, the American company d.light reported that its solar kits provide access to electricity to 100 million people around the world, most of whom are in Africa. In addition to solar home systems, some companies provide additional solar kits, including solar lamps and lanterns.

Mini-grids also allow rural electrification. These are small photovoltaic solar power plants with electricity storage systems using batteries or hybrids with generators. These facilities are equipped with small distribution networks capable of supplying a community or a village. Later, if necessary, mini-grids can even be connected to the core grid. But in the Democratic Republic of Congo (DRC), the Nuru company is already deploying mini-grids of more than 1 MW that supply entire towns, such as Goma, the capital of the province of North Kivu. 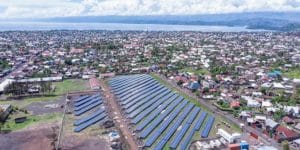 In Nigeria, the most populous country on the continent (more than 206 million inhabitants in 2020, editor’s note), the authorities are particularly relying on mini-grids for the implementation of an ambitious rural electrification project (NEP) supported by the World Bank and AfDB. In this context, the Rural Electrification Agency (REA) promotes the establishment of solar mini-grid suppliers by setting up a performance subsidy system (PBG).

In addition to these ground-based systems, other operators have specialized in the installation of containerized solar mini-grids. This modular solution is easy to set up since the main components are prefabricated before being transported by sea container.

What about solar power for productive use?

Productive solar energy systems are among the off-grid solutions deployed to power commercial and industrial customers. In most cases, the company that receives the solar energy does not invest anything, but simply pays the electricity consumption bills to the supplier who installs the system. This is known as “solar leasing” and is particularly popular in countries like Nigeria, Ghana and Kenya.