With saplings in hand and faces veiled in colorful saris, relatives of Suman and Sarita Takariya sang traditional songs as the sisters planted small shrubs during their combined pre-wedding celebration in a remote Indian village.

Suman, 21, and Sarita, 19, who married their husbands in a joint ceremony, are part of a growing trend in the western desert state of Rajasthan, where families donate and plant native trees as a new addition to local customs and rituals. The sisters’ wedding card read, “Protect nature and nature will protect us.”

“They are part of our family now,” Sarita said as she cleaned her muddy hands after planting an oleander shrub. “We will go to our in-laws, but they [the trees] will be there for our parents.”

From weddings, births and funerals to festivals such as Holi and even family accomplishments like buying a new car, plants and trees have become centerpieces of local culture, helping to bring the sandy soils to life. of northwestern Rajasthan.

More villagers were adopting the practice as they saw the benefits, whether it was easy access to fruit or cool shade, said Shyam Sunder Jyani, the man behind Familial Forestry, a project that aims to connect trees to families and their rituals.

But soil scientists warn that planting trees alone is not enough to tackle the growing problem of land degradation.

Rajasthan is India’s largest state and also the most degraded in terms of land, meaning it suffers from a persistent decline in soil quality and fertility. The problem affects people’s food security and incomes and makes them vulnerable to weather-related disasters such as drought.

Factors such as climate change, overgrazing, over-cultivation, deforestation and urbanization play a role in land degradation and desertification.

“That’s why it’s important to build green infrastructure, because it creates a ripple effect, fighting everything from food insecurity to climate change,” Jyani said in Bikaner, a town near the rolling dunes. of the Thar Desert.

Arid climate: A man leads his camels through the sand dunes of the Thar Desert on October 7, 2021 in the village of Sam in Rajasthan, northwest India. (AFP/Sajjad Hussain)

Soil also naturally absorbs carbon from the atmosphere through a process known as sequestration, which not only reduces harmful greenhouse gases (GHGs), but also creates more fertile soil.

Jyani said a proven way to ensure more trees were planted was to make trees “green members” of families.

“When we personify a tree, it emotionally connects the family […] and that makes the tree a part of them,” the 43-year-old sociology professor said.

“By clubbing tree planting with rituals and festivals, which are pillars of our social life, we make people empathize with their local ecology and environment.”

Rajasthan has few forests compared to other states, accounting for only 8% of its total area, according to government analyzes and data.

But over the past 16 years, more than a million families in at least 15,000 villages across the state have planted an estimated 3.5 million saplings under the family forestry project.

More than a dozen program participants have told the Thomson Reuters Foundation that they are literally enjoying the fruits and flowers of their labor, witnessing increased groundwater levels, improved crop yields and, eventually, more income.

“The trees have changed my life. The fruits are as sweet as I had when I was a little boy. The birds I haven’t seen in decades are back,” said Professor Brij Mohan Singh distributing saplings to guests at a luncheon. event for her son’s wedding.

“It’s for my grandchildren, for the next generation. We have to leave them a healthy environment, especially since the threat of [global warming] increases every day.”

Singh said he planted five saplings at home and helped his school plant more than 7,000, which provided a cool canopy for students in the scorching summer heat, as temperatures often exceeded freezing. 50 degrees Celsius.

“They say they feel like they’re sitting in an air-conditioned room,” he added.

Laxmi Kant Sharma, professor of earth sciences at Central University of Rajasthan, praised family forestry for tapping into India’s centuries-old roots in conserving forest resources. But he warned it was important to plant only native trees because others “often become killers of native desert species” and could harm wildlife habitats. 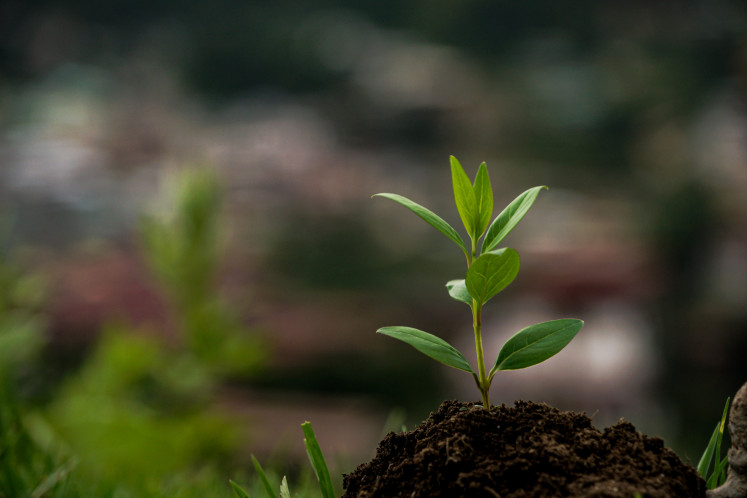 India pledged to restore 26 million hectares, or almost 27%, of the country’s degraded land by 2030 when it hosted COP 14 of the UN Convention to Combat Desertification (UNCCD) in 2019.

Nearly 30% of land in India suffers from degradation, according to a report by the Indian Space Research Organization (ISRO) released last year.

Rattan Lal, an award-winning Indian-American soil scientist known as the ‘godfather of soil science’, is urging New Delhi to launch a scheme that would pay farmers 2,325 rupees ($30) for every tonne of carbon dioxide absorbed by their lands.

These carbon credits are becoming increasingly popular financial instruments for companies or governments wishing to “offset” their own emissions, by paying others to reduce or prevent GHG emissions for them.

Yet such credit systems could inspire people “to do good,” Lal said in a video interview from Columbus, Ohio.

Farmers often feed their crop residues to livestock and also use them to build houses and fences, even for cooking, when they could instead be returned to the soil to boost organic matter.

Famous Indian spiritual leader Jaggi “Sadhguru” Vasudev is on a one-man mission to bring the problem to light. He recently completed a 30,000 kilometer motorcycle journey through Europe, the Middle East and India to raise awareness of the deteriorating state of soils around the world.

“Healthy soil and healthy life are inextricably linked,” Sadhguru said at the annual meeting of the World Economic Forum in Davos last week. “In the next 10 to 15 years, we can make a significant turnaround.”

In Rajasthan, Harinath Siddh said he played his part by gifting and planting saplings at his wedding earlier this month. “I wanted to show [my wife] that I care about the environment,” the 25-year-old said.

“And that way we can care for these trees as if they were our own children and watch them grow.”