Luxury Swiss watch brand Jaeger-LeCoultre kicked off this year’s Watches & Wonders show with a stunning new interpretation of Universal Time: the Caliber Master Grande Tradition 948. The Manufacture’s renowned Atelier Métiers Rares operated its magic on the watch to transform the mechanical masterpiece into a work of art worn on the wrist. Starting with the watch’s intricate 43mm white gold case, it’s every bit as intricate as the movement housed inside. Comprised of over 80 individual parts, the three-dimensionality of the case adds depth to the timepiece through elements like the convex bezel which contrasts with the wide bevels on the lugs, and the hollowed sides of the lugs bring the design to life. In addition, the various surfaces of the bead-blasted, polished and satin-brushed case perfectly complement the complexity of the timepiece.


Coming to the stunning dial of the Master Grande Tradition Caliber 948, it features an intricately crafted world map seen from the North Pole. Created by the master craftsmen of JLC’s Métiers Rares workshop, the continents on the map are highlighted in white gold and decorated with champlevé enamel, while the details of the landscape are highlighted with the traditional art of painting. miniature. Moreover, the continents and the flying tourbillon seem to float on a translucent blue lacquer dial bed applied to an undulating guilloché pattern that represents the blue oceans. The map is wrapped around a domed skeleton formed by the longitudes and latitudes of the northern hemisphere which adds depth to the dial. 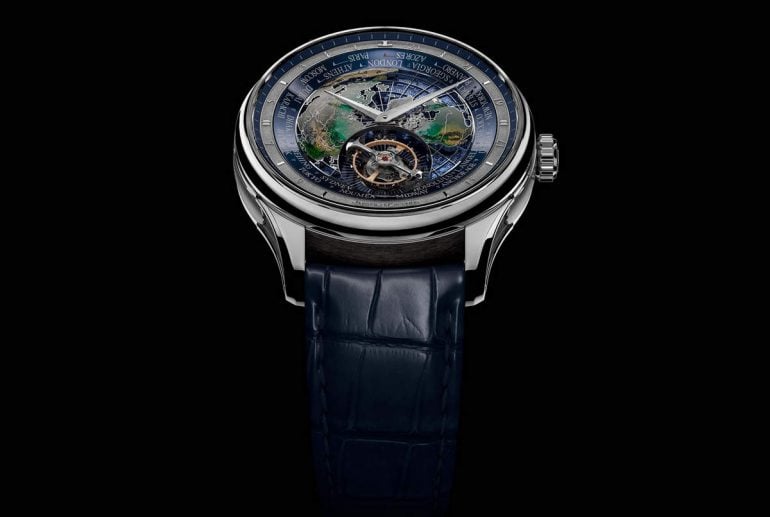 The Jaeger-LeCoultre timepiece is powered by Caliber 948, which is designed, developed and produced entirely within the Manufacture. When the automatic movement was created, it was the first time that a world time complication was coupled with a flying tourbillon. The Universal Tourbillon performs a complete revolution of the dial every 24 hours, i.e. the length of an average solar day. The movement offers a power reserve of 48 hours. The timepiece is paired with an alligator leather strap with a folding clasp. Jaeger-LeCoultre said it would only produce 20 of the watch, but pricing has yet to be announced.