Solar stocks rallied on Monday after President Joe Biden imposed a two-year pause on new tariffs on imports of solar panels and components from four Asian countries: Cambodia, Malaysia, Thailand and Vietnam. A decade ago, the United States imposed tariffs on solar energy imports from China to prevent it from selling subsidized products at low prices in the country. The Commerce Department is investigating whether Chinese companies circumvented these tariffs by routing imports through the four Asian countries.

If true, such circumvention would result in retroactive tariffs of up to 250%, which had effectively halted imports of solar components from these countries. Under Biden’s latest plan, no new tariffs would be imposed on imports from the four countries for at least two years. While Biden’s plan may help revive the solar industry in the near term, there are also several long-term growth drivers that make solar stocks attractive.

Solar companies should benefit from the tariff stop

Biden’s freeze on new tariffs for two years in the four Asian countries will spur growth in the US solar industry. According to Reuters, these countries account for 80% of US solar imports. Solar companies can benefit from the new plan in several ways. First, imports will drive utility-scale solar development projects, in turn benefiting solar inverter vendors such as SolarEdge and Enphase Energy.

Second, it will likely boost residential and commercial installations, benefiting companies such as Sunrun. Finally, some manufacturers who depend on imported parts can also benefit from this plan.

The demand for solar inverters is expected to increase

Leading solar inverter supplier SolarEdge expects global inverter shipments, even excluding China, to grow at a compound annual rate of 10.5% from 2021 to 2025.

Global shipments could increase from 126 gigawatts in 2021 to 187 gigawatts in 2025. SolarEdge and Enphase Energy are the major players in this segment. Both companies have experienced impressive growth over the past few years. 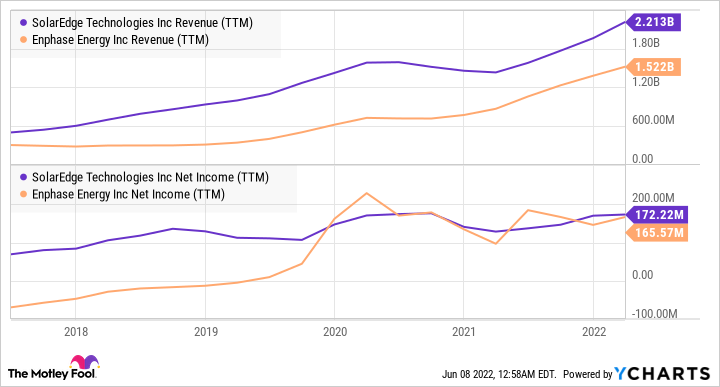 SEDG Revenue (TTM) given by Y-Charts

The residential solar market is under-exploited

Only 4% of detached and occupied single-family homes in the United States currently have solar installations. Although this is a significant improvement from just 0.3% of households in 2011, penetration is still very low. 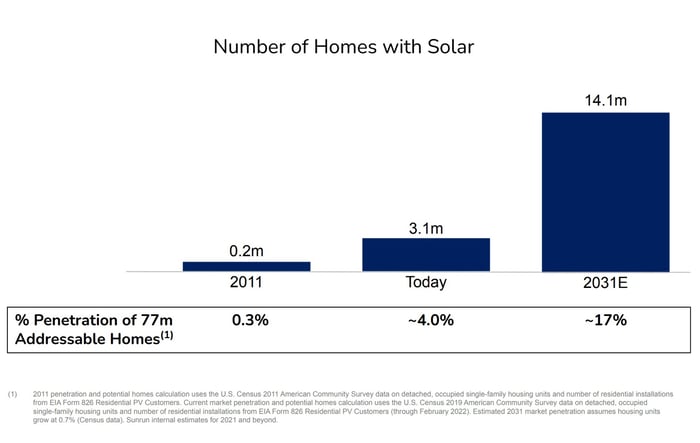 If the residential solar industry grows at 15% per year, Sunrun estimates that penetration will still reach around 17% by 2031. Notably, assuming that 77 million of around 79 million single dwellings are occupied (based on the 2019 census) are addressable. homes for residential solar is aggressive. It is estimated that only about 80% of these units can be suitable for a solar installation. And we don’t even consider economic viability or credit ratings, which can drive addressable units further down. Although the potential market seems a little optimistic, the falling costs of solar power and batteries may make solar power increasingly viable for those for whom it is not today.

Even if we take the projections above with a grain of salt, residential solar has immense growth potential. Rising retail electric utility rates, supply disruptions, falling solar and battery costs, and climate change concerns are expected to drive the long-term growth of the residential solar market .

Sunrun is a leading player in the US residential solar market based on installed solar capacity. In addition to the benefits of scale, it can also cross-sell or up-sell to its existing customers. Overall, Sunrun appears to be best positioned among residential solar installers to benefit from the expected growth in the industry.